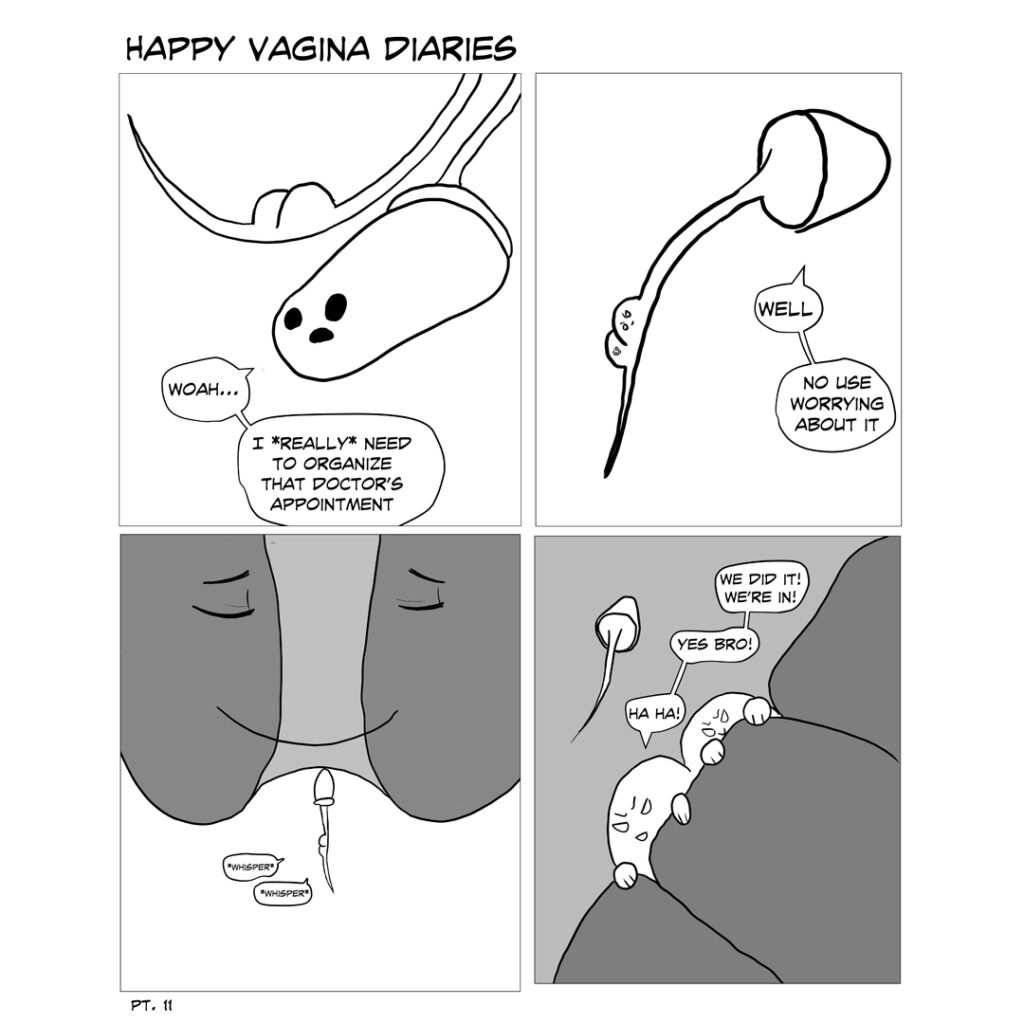 Mayday! Mayday! ….John has been moaning about an “unusual” yellow-y-white discharge from his penis, and burning when he pees…..Jane is wondering why he doesn’t just get it “seen to”. Jane is sure there is an infection going on….and she knows how infections may be coming her way. Not that she is an expert BUT she does know a thing or two about STIs….

This one sounds and looks like “naughty” Neisseria gonorrhoea…those pesky diplococci – like little conjoined rotund twins of menace.

Jane read on Wikipedia with interest that Neisseria gonorrhoea was named after the “renowned” German Dr Albert Neisser in 18791…wouldn’t he be surprised to find out that the eponymous diplococcus is now causing mayhem in adolescents and adults around the world – becoming the superbug that has developed resistance to antibiotics!

Now it turns out that there is also evidence that the naughty gonorrhoea diplococci sneak around like little “stowaways” and ride sperms on the semen waves2 – to ensure the most effective transmission during sex.

Life is strange! That’s for sure. 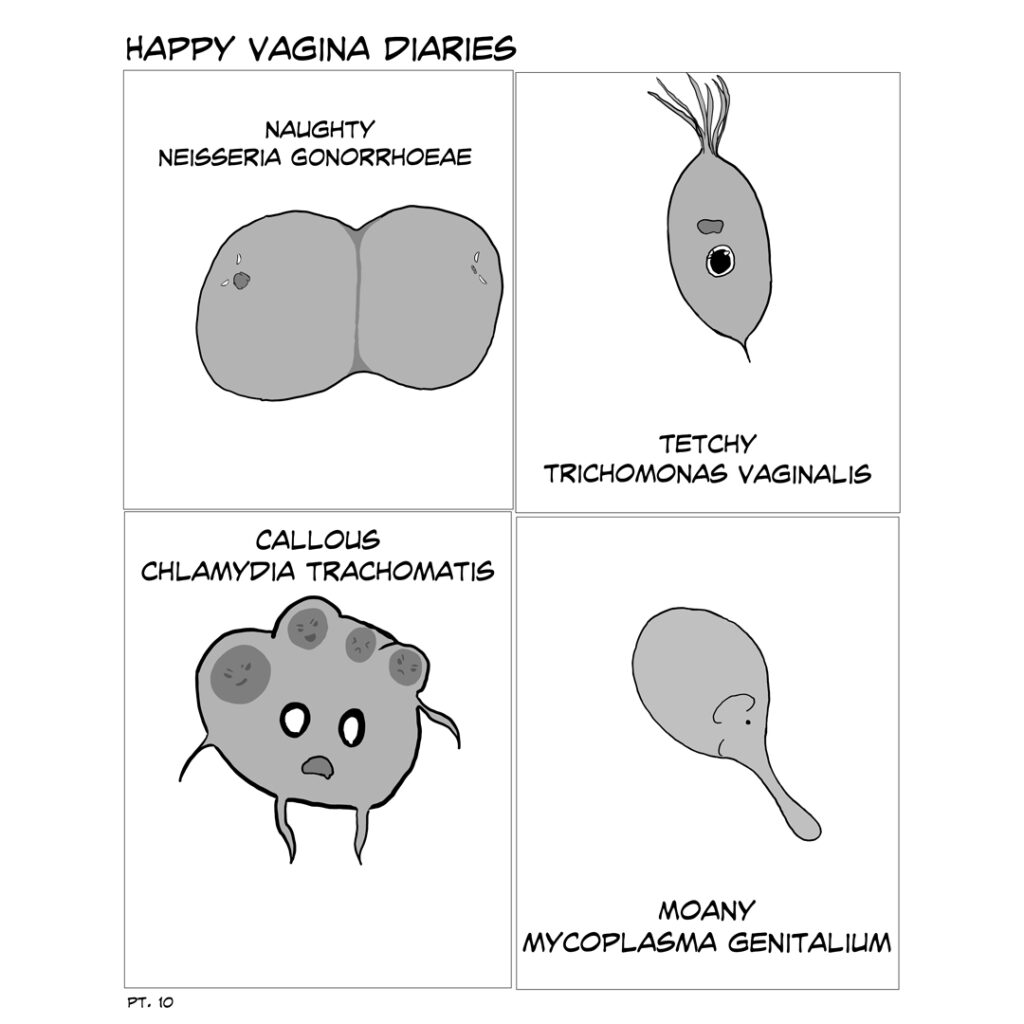 Lovely Jane is enjoying her reproductive freedom, defining herself as an independent woman, with self-agency. But she does admit that, in the time since she has found her contraceptive of choice, she hasn’t been very good with ”condomizing” and this has now caused some problems for her…

Jane has seen changes in her normal vaginal discharge – what could be the cause? The nurse at the clinic has checked that it is not bacterial vaginosis…so something else must be brewing…

Could it be Neisseria gonorrhoea – the “clap”?

Could it be Chlamydia trachomatis?

Could it be Trichomonas vaginalis?

Could it be Mycoplasma genitalium – and is this even a “thing”?

The nurse has offered Jane a very sensitive screening test – she called it a nucleic acid amplification test – NAAT for short. Should Jane take this test? What would it tell her? And what will the outcome mean for Jane? Follow Jane’s journey for an answer over the next few weeks to see what her options are. 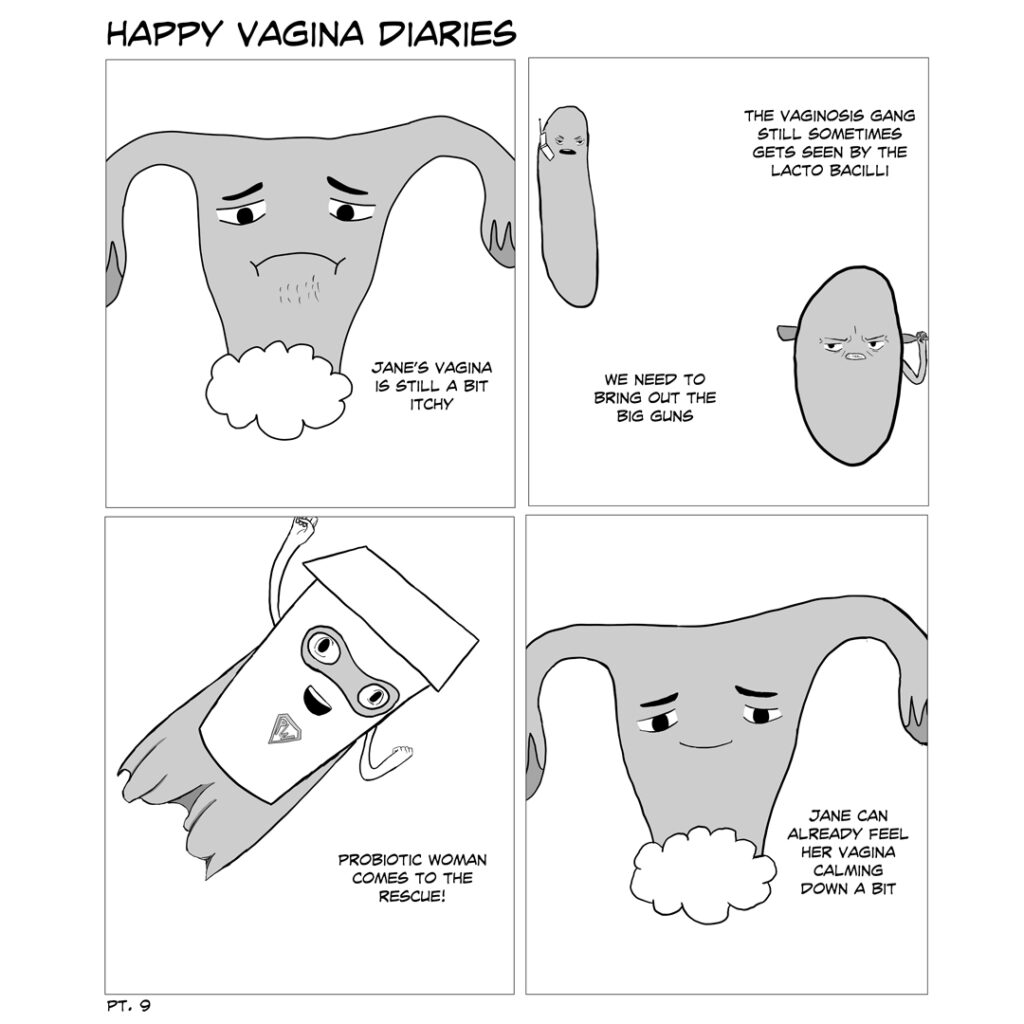 A few weeks later Jane is back at the clinic. It seems her favourite lactobacilli have struggled to dominate against the vaginosis family. They need back-up desperately. The lovely nurse suggests a probiotic as Janes next course of treatment. Jane had never thought of a probiotic to help her vaginal flora… she had only ever thought of it for her tummy, but Jane was so unhappy with her reoccurring symptoms she was willing to try anything. The nurse explains to Jane that the probiotics will probably help but the reality is that BV symptoms can still come back at some point. The good news for Jane is that the probiotic is not known to have any side effects.

Probiotics can be defined as “live microorganisms, that, when administered in adequate amounts, can confer a health benefit to the host”1. The probiotic that Jane will be taking contain Lactobacillus strains that don’t necessarily normally live in the vaginal microbiome “garden” but would still be able to help fight off the vaginosis family. Clinical trials have showed positive results using probiotics as treatment as well as a reduction of the reoccurrence of BV that many women experience2.

With the back-up of their Lactobacillus cousins, Jane’s favourite lactobacilli finally win the battle against the persistent vaginitis family. They have overstayed their welcome but now Jane’s vaginal microbiome garden has been seeded with more welcomed and hopefully permanent residents. 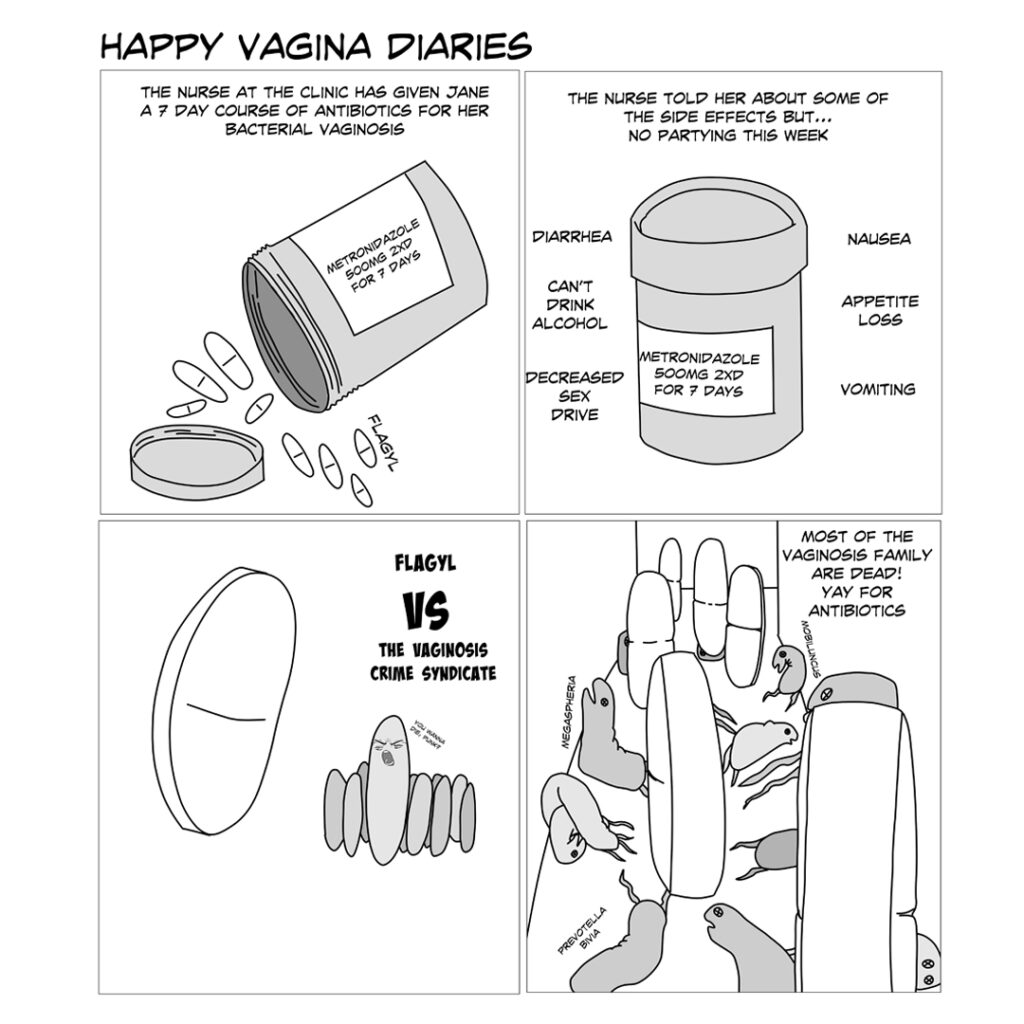 So….the Nurse at the clinic was lovely and explained to Jane that bacterial vaginosis was relatively easy to treat with antibiotics. She did warn Jane that this could re-occur, as about half of women who finish their course of antibiotics seem to come back to the clinic with bacterial vaginosis within 6 months. But the Nurse promised that this antibiotic – Metronidazole – was the best there currently is for getting rid of the vaginosis bacteria….

Jane thought that the “brand” name of the antibiotics she was given was so weird…FLAGYL! Why Flagyl? It sounded like flagellate, flagellum, flatulence….she had to laugh. But the Flagyl worked!

Metronidazole (commonly known by the brand name Flagyl) was first developed in the 1950’s as a drug to treat parasites like Giardia and conditions like amoebic dysentery1. The activity of metronidazole against bacteria was actually discovered by accident in the 1960’s, and became the most popular way to treat anaerobic bacteria (that do not like oxygen at all)1, like the vaginosis family. The only thing that pains Jane is the long list of side effects from taking Flagyl….she feels nauseous, her tummy is running, she doesn’t feel like eating at all and she can’t go out drinking and partying with her friends  – NO ALCOHOL the Nurse said!

But…..it’s good to be rid of the vaginosis family – her vaginal microbial “garden” has been weeded and she’s hoping that her favourite lactobacilli will return to dominate! 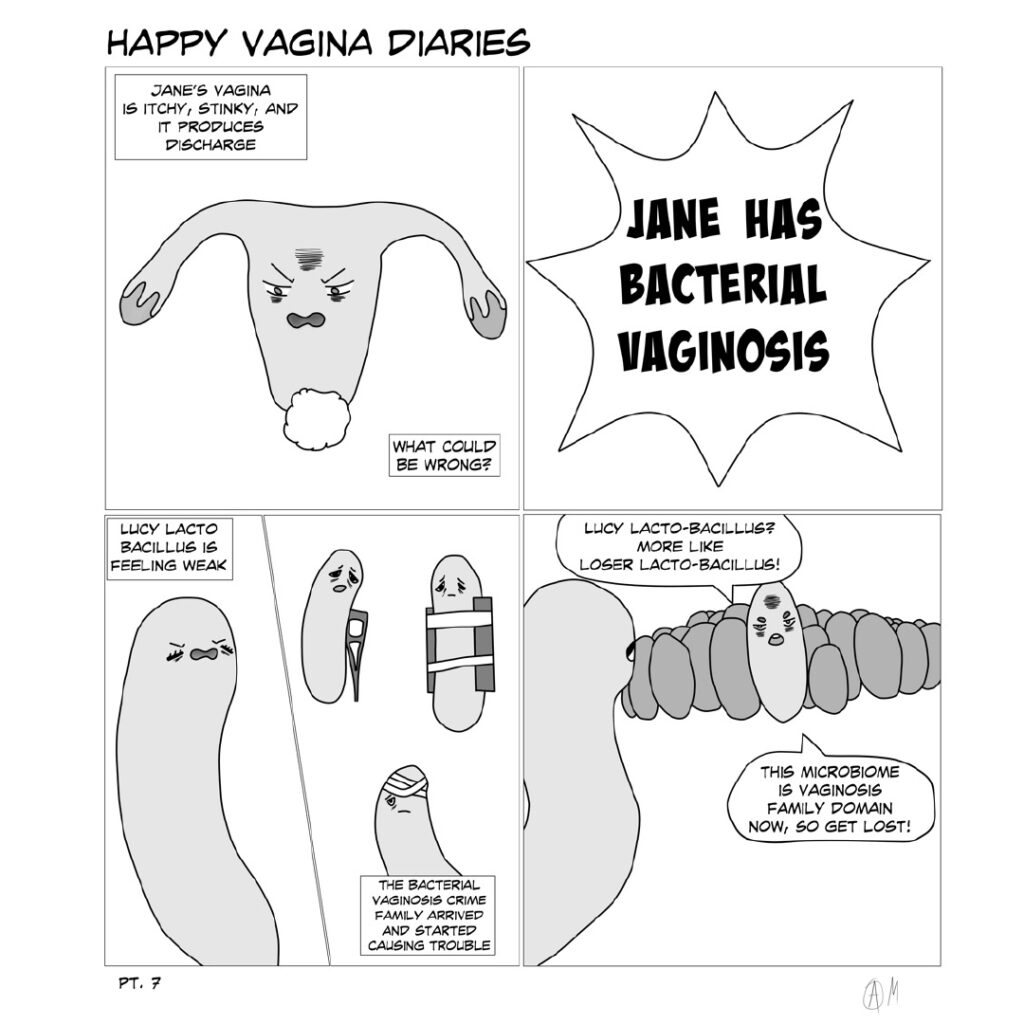 The New Year has started with a gooey, smelly, itchy bang for Jane! She ended 2021 doing so well and being so careful….. So why the extra fishy smell down there? Jane knows about bacterial vaginosis…. The nurse at the reproductive health clinic explained that it is an overgrowth of a diverse assortment of non-Lactobacillus bacteria with weird and wonderful names like Gardnerella, Mobiluncus and Prevotella that produce the most stinky metabolites (like putrescine), turn her vaginal discharge milky and thin, and irritate the normally quiet and peaceful place that is her vagina. Why have her trustworthy and hardworking vaginal Lactobacilli disappeared? Who are these new characters that have moved in and turned Jane’s vagina into a hot mess? Why now! Jane has read that bacterial vaginosis can be caused by a whole range of things like douching, using water or a medicated wash to clean inside the vagina, having a bath with an antiseptic, or even using some perfumed bubble baths, vaginal deodorants, or scented soaps. Keeping the good bacteria happy might seem like hard work but, really, it is not – Jane keeps forgetting that her vagina is a self-cleaning, self-lubricating marvel of nature.

Jane does need to get this hot mess treated. The nurse at the clinic will be able to help to sort the good bacteria from the bad. Long may the lactobacilli rule that roost! December is Festive season! Lots of end of year parties, lots of good food, good times and good vibes. For us in the Southern hemisphere, its SUMMER holidays! It goes without saying that the festive season is also the time for greater sexual risk taking among young people. In a South Africa, the festive season is the period when teenagers are most likely to engage in unprotected sex, particularly under the influence of alcohol and drugs, because they are celebrating the end of the school year, and their good school results1. It comes as no surprise that September is “childbearing season” worldwide, linked to conceptions during the festive and New Year period – twice as frequent as on any normal day of the year2.

Against this backdrop, Jane and John are also out partying during the festive season – catching one another’s eye under the mistletoe. A quick kiss, a slow dance and…..John whips out his trusty Christmas condom….Jane produces some silly Santa’s lube for occasions such as this…. 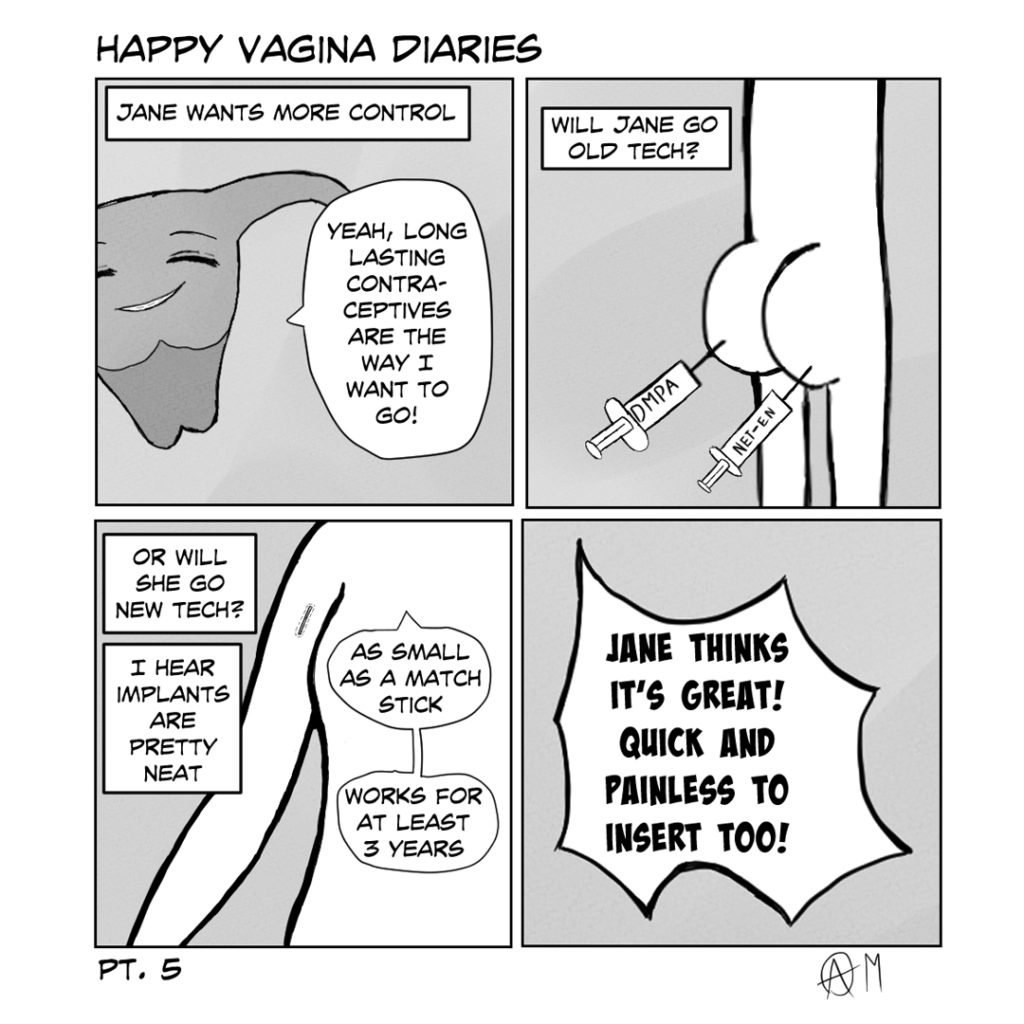 Jane has seriously been reconsidering her contraceptive choices during the COVID19 pandemic! Contraceptives have been in short supply, because of supply chain disruptions. Being one of the world’s largest producers and exporters of condoms, contraceptive pills and IUDs, India’s restriction on the export of some crucial pharmaceutical ingredients and medications has seriously affected contraceptive supply at Jane’s local clinic.

Jane was anxious to read an article by the United Nations Population Fund that “up to 23 million women may have been unable to access family planning services as a result of the COVID-19 pandemic, resulting in as many as 1.4 million unintended pregnancies”.

Jane “The Brilliant” is so relieved that her friends told her about the small but powerful sub-dermal implant – one of the easiest, effective and long-lasting contraceptive methods that are available to young women. She won’t have to worry about supply as it offers her at least three years of protection, slowly releasing very low doses of progestin, protecting her against pregnancies – but not STIs alas! She’ll still have to insist of the trusty condom to protect her from those….and she has lots of those stored away “just in case”! 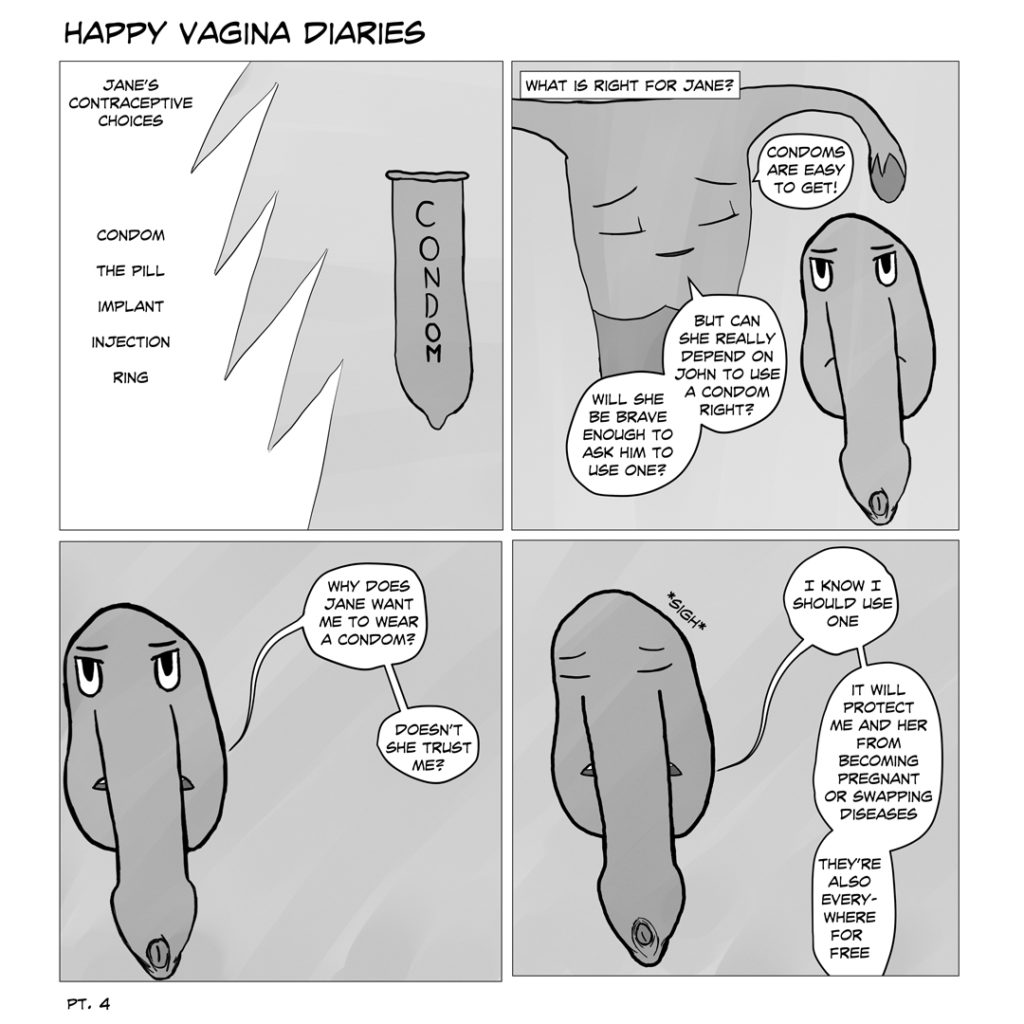 The Condom is the glass slipper of our generation. You slip one on when you meet a stranger. You dance all night… then you throw it away. The condom, I mean, not the stranger”. – Quote: Helen Bonham Carter as Marla Singer in Fight Club.

Our feisty heroin Jane explores her contraceptive options further this month. What about condoms? They are one of the world’s oldest forms of birth control, although weren’t widely used – much less accepted – until the 1940s, when the demand for fighting fit, syphilis-free soldiers around the world changed the face of contraception forever. From early prototypes of linen and sheepskin to thick rubber sheaths that stank of sulphur, condoms haven’t always been the most comfortable form of contraception. The World Health Organisation still advises that “condoms are the only contraceptive method proven to reduce the risk of all STI’s, including HIV, as well as prevention of pregnancy. Our heroin Jane is choosing when she wants to fall pregnant through accessing contraception. Jane is standing on the shoulders of giants – powerful contraceptive innovators that significantly improved various aspects of life, including women’s health, family roles, feminism, and gender relations.

“No woman can call herself free who does not own and control her body. No woman can call herself free until she can choose consciously whether she will or will not be a mother.” – quote: Margaret Sanger, American birth control activist, sex educator, writer, and nurse 1879-1966. Thanks to activists like Margaret, there are a whole arsenal of different reversable contraceptive methods available to young Jane – long-acting contraceptives, short-acting contraceptives, and barrier methods – ensuring young women can choose the type of contraceptive that suit them physiologically and socially.

1. Makhubele, Jabulani, Masilo. 2017. Reviewing factors which predispose learners to indulge in sexual activities against the risk of pregnancy and sexual diseases: implications for social work intervention. Gender and Behaviour, 15, 9627.